The strategic location of the Scheldt estuary has left its mark: The area was many a hard-fought battle and for defense, thoughtful use was made of what soil and landscape had to offer. Remains of forts, lines, inundation creeks and other military works often follow the geological gradients in the area.

In the Middle Ages, people built wooden defense towers on steep earthen mounds called Motte castles. In Zeeland, where they are often mistakenly called "vliedberg," several hundred stood. Mottes are also still found in Flanders. Then stone castles replaced wooden towers. They were raised in strategic places: close to the Scheldt but on higher ground. Even on the Brabant Escarpment in the Middle Ages there were at least six castles, which must have been visible from afar at that height.

Cities initially received city walls to defend themselves, and modern "star-shaped" fortifications appeared from the sixteenth century onward. The Spanish walling of Antwerp was the first such realization north of the Alps and a piece of cutting-edge military technology. To defend the Western Scheldt, by now the main shipping route to Antwerp, the sea fort Rammekens was constructed in the mid-sixteenth century. To defend Antwerp, the forts of Lillo and Liefkenshoek were built by order of William of Orange between 1578 and 1582. From there, the Scheldt could be controlled.

After Belgian independence (1830-1839), a new border region emerged and the military importance of the Western Scheldt increased. In order to further control it and repel an attack from the south, Fort Ellewoutsdijk was built on the south side of Zuid-Beveland, which incidentally never served.

The polders in the Scheldt estuary lent themselves perfectly to defensive purposes. By breaching the dikes, areas were flooded, making them virtually inaccessible to the enemy. This defensive tactic was used for centuries: from the Eighty Years' War to World War II. The remnants are visible everywhere.

Many creeks in Zeeuws-Vlaanderen are the result of military inundations from the end of the sixteenth century. By breaching the dikes at Sluis during the Eighty Years' War, seawater flowed in, scouring a deep creek, the Lapscheurse Gat, a tributary of the Zwin.

Also new in the Eighty Years' War was the construction of defensive lines. Along the Eendracht, fortifications were built to defend shipping traffic. In the north of Flanders, the State-Spanish lines arose along today's national border. There are still hundreds of remnants of these military works, ranging from fortified towns and forts to entrenchments and redoubts.

An armor of water, brick and concrete

When Belgium gained independence in 1830, strict neutrality was imposed on it. Antwerp was fortified because of the strategic and economic importance of the city and its port. From 1851 to the mid-20th century, one of the largest European fortifications was thus created, with a city wall, two fortress belts, entrenchments, bunker lines, defensive dikes with inundation zones and an anti-tank moat.

Many remnants of the Atlantic Wall, the German defense line from the Norwegian to the French coast, have been preserved from World War II. This was a continuous line of coastal batteries, barricades and support bunkers. The Scheldt gave its name to one of the heaviest battles during World War II. The Battle of the Scheldt marked the end of this war for the Netherlands. The operation was intended to clear access to the port of Antwerp via the Western Scheldt for the Allies.

Reconstructed ring-wall fortresses can be found in Oost-Souburg and Burgh. The Hoge Wal in Ertvelde, with Neerhof, is one of the best preserved mottes in Flanders. The Mount of Troy in Borssele is a Zeeland example. Museum Terra Maris near Oostkapelle shows a reconstructed motte castle. Parts of the Zuiderwaterlinie/West Brabantse Waterlinie, such as Fort de Roovere, have been restored. The same applies to the State-Spanish lines, to which Museum het Bolwerk in IJzendijke is also dedicated. A beautiful view of part of the State-Spanish lines can be had at the Moerspuische Watergang. Numerous fort (grounds) can be visited. Fort Liezele in the province of Antwerp has become a museum, dozens of Antwerp forts and military relics have become recreational areas, and along the anti-tank ditch you will find fascinating bicycle routes. In the Mastenbos in Kapellen, you will discover the best preserved and largest set of trenches from World War I in Belgium. Museums about the Second World War and the liberation are in Nieuwdorp and Maldegem, among others. Remains of the Atlantic Wall can be visited in several places in Zeeland. In Antwerp, you can visit the command bunkers in Park den Brandt. 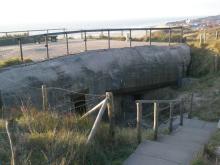 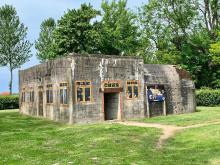 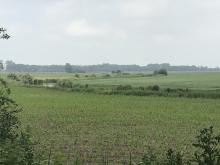 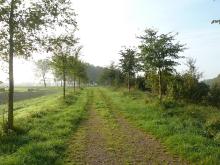 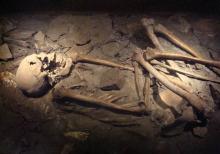 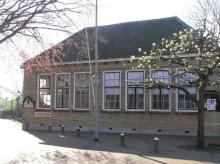 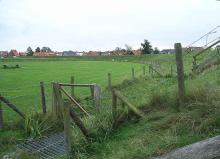 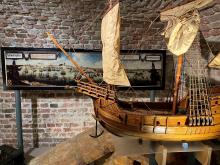